I’d shlep my stuff out of my broken down van and through the backdoor. I’d beg somebody to help me gorilla the Hammond B3 organ up the few steps to the stage.

APUMEC Hall- it stood for something I never knew what- was a rickety old Mexican dance hall on East 14th (now International) Blvd. at Fruitvale right across from the ubiquitous Doggie Dinner.

Alma Latina would play Rancheras and cumbias and some Little Joe and Ray Camacho. Norteno stuff like Los Tigres but also War and Tower too. Guys in the band wore ruffled tux shirts unbuttoned two buttons from the top so the t-shirt was visible. That and polyester black pants with Flagg Bros platform shoes you were all set. If you wore all that and drove a burgundy Monte Carlo w/opera widows, well then, you were really happening.

And everybody drank Ten High and Seven.

And every night towards the end there was what I called a Mexican Hat Dance. 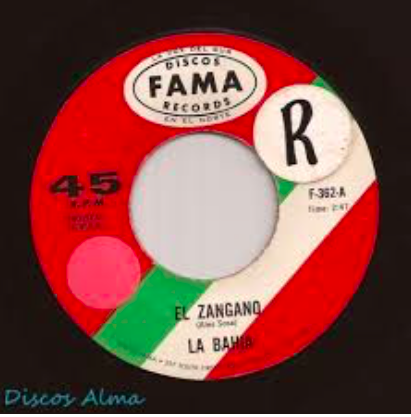 La Bahia or Internacional Bahia was my other high school band.

I joined Internacional Bahia after they had already made their 45 but I didn’t care. Just being in a band with a 45 made me feel big time. Those were the days. btw- they added “Internacional” to their name, copying Ray Camacho and The Internacional Teardrops. “We go to TJ once a year” they’d told me.

They were funny guys.

I hadn’t thought about any of this for what seems 50 years but a couple weeks ago it all came back.

I had picked up Chris at his place in San Rafael and drove to The Marin City Rec Center. While we sat and waited for the dance to start I pondered if Tupac had ever spent time here. Had to had. There’s nothing else to do around here. Anyway soon enough the dance started and it was an onslaught of volume and swirling vari lights. Interesting in that the lights were setup in front of the musicians and pointed at the basketball court. Mostly young people they all only danced with the person they came with. Interesting again.

But now I learned that what I had been calling a Mexican Hat dance was actually a huapango.

Later Chris commented that it wasn’t as cool as the first time he went but it never is. These kinds of ethno treasure hunts are always hit and miss and for sure if you see something unbelievable the first time you won’t be seeing anything like it the next time. Especially if you bring friends to check it out. That never happens.

After I dropped Chris off and drove back to the city I noticed that I was depressed. Seriously, driving down 19th Avenue I kinda checked myself and saw that I was bummed. With friends passing away lately and a moody feeling of being disconnected from my past. Playing East 14th Street dance halls was like 50 years ago and damn near that long since I’d even seen anybody connected with that scene. Had it really happened the way I remembered it?

I thought there was nobody left who would know about it and it bummed me out.

But I was wrong.

A week later I met the famous Chuy Varela at an Arhoolie Concert in the city. He knew everything about back then. APUMEC HALL, The Sands Ballroom, The Newark Pavilion. He even knew the bands I played in: Alma Latina and Internacional Bahia.

Just that afternoon I’d all but convinced myself that it had been a dream.