Vicki Randle was no fresh-faced ingenue when she joined Rock & Roll Hall of Famer Mavis Staples as a percussionist and backup singer in 2010. Well-established as a top-shelf Los Angeles studio musician with dozens of albums and major tours to her credit, she was looking forward to some down time after nearly two decades in the “Tonight Show” band.

But she couldn’t say no to the iconic Staples. For the next eight years, Randle provided soaring harmonies for the resurgent soul legend, who first gained fame as lead vocalist with the Staple Singers, the family gospel ensemble responsible for some of the civil rights movement’s most popular and enduring anthems.

Tired of the road, Randle decided to leave Staples last year. Back in Berkeley, where she spent much of her childhood, she’s found that her experience with Staples “was an apprenticeship in more ways than one,” she says. Her latest project is the Bay Area supergroup Skip the Needle, a funk metal collective featuring Shelley Doty and Katie Cash on guitars, Kofy Brown on drums, Randle on bass and percussion, and all four women on vocals.

With three of the Bay Area’s most prominent black female rockers and the versatile powerhouse Cash (a.k.a. Katie Colpitts), the group has honed a potent repertoire of original songs that marry urgent political declarations with elemental beats. Taking a page from Staples’ book, Randle and her comrades play trenchant anthems that alternately induce head bobbing and booty shaking without hectoring listeners.

“Even people who may not agree with what Mavis was talking about were just so mesmerized,” Randle says. “What they were listening to was not only joy, but justice. That’s what I want to do. We’re a political band, but we’re not trying to yell at you. We’re trying to bring you with us. We’re subverting people’s minds by injecting them with joy.”

Founded in 2014 by veteran blues keyboardist Jim Pugh, Little Village has released a dauntingly diverse array of roots music projects, but nothing like “We Ain’t Never Going Back.” The album opens with the crunching heavy metal guitar chords of “Battle Cry (Ay Ay Ay).” It’s a sound that inspired Bootsy Collins to share a Skip the Needle video on Facebook as the answer to his question, “Are women rockin’ harder now?”

They reached a whole new audience in May delivering a ferocious version of “Oh My God” as part of the UnderCover Presents album and three-day tribute to A Tribe Called Quest’s “Midnight Marauders” at Yerba Buena Center for the Arts.

Katie Colpitts plays in the hard rock combo Dolorata, though to make matters confusing she also records and performs as the respected alt-country artist Katie Cash. Brown and Doty have been working together for years in Sistas in the Pit, a band they describe as Sade meets Jimi Hendrix, though they’re best known as the front women in their own bands. 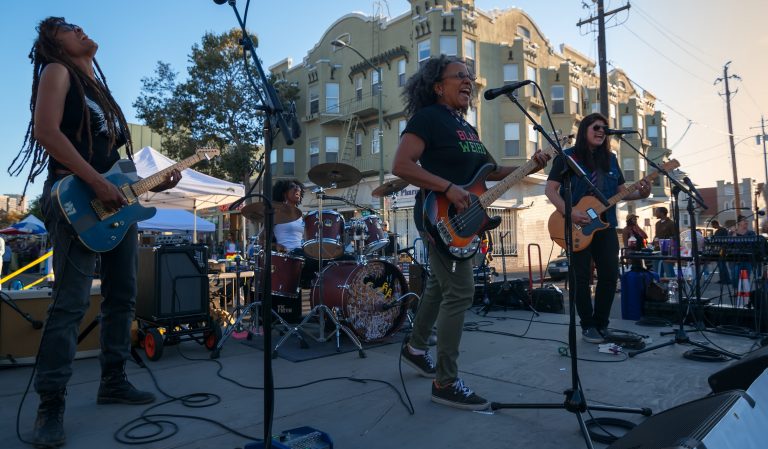 Skip the Needle isn’t just a collective ensemble. It’s a vehicle for the players to step out of their regular roles. “We’d get together, and if we’re jamming I’m playing drums,” says Brown, who usually backs herself on guitar. “Vicki said, I’m going to play bass. I just did a show Saturday with my band, and I’ve got to take care of all the details. With Skip the Needle it feels like it’s no pressure.”

Randle first heard Brown and Doty about a decade ago when she was booked at Oakland’s Art & Soul Festival as a solo headliner, “the big shot from L.A. playing in the ‘Tonight Show’ band,” she says. Sistas in the Pit featured Anita Lofton at the time, and when Randle heard the soundcheck, she was leery about following the band. “And in fact, they just blew me off the stage,” she recalls. “But I made some good friends.” – Andrew Gilbert, June 24, 2019 (Photo: Irene Young)