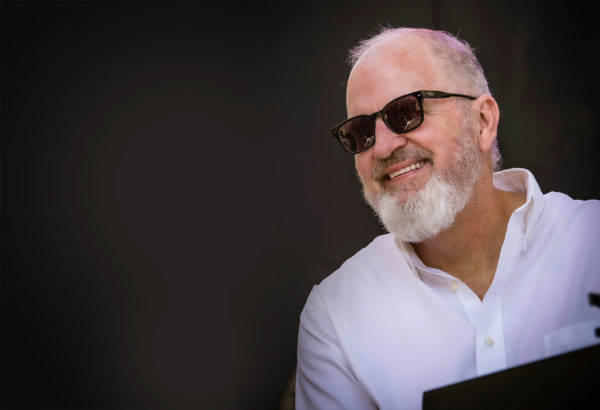 A prominent blues keyboardist, Jim Pugh’s music career spans 40 years with a resume of working with an array of musicians including B.B. King, Etta James, John Lee Hooker, Robert Cray, Boz Skaggs, Syl Johnson, and Van Morrison. Pugh started playing the piano at a young age and maintained his deep interest in music throughout his adolescent and teenage years. After attending University of the Pacific for three months before dropping out, he moved to San Francisco and started playing any kind of music he could find. What started with playing for dance classes and music in clubs turned into his first stint with a band, Rubicon, that had a record deal. Eventually, Pugh was connected to a well-known blues club “Larry Blake’s” where he joined the Rat House band, which led him to working with both Etta James and Robert Cray starting in 1989. For the next 25 years Pugh played with Cray nine months out of the year, while raising four kids with his wife, Deborah.

I am very, very lucky to have been able to raise a family, own a house, get the kids through college. It hasn’t been easy. I’m going to be playing bar mitzvahs until I am ninety to pay for it!

After taking a step back from touring, Pugh found himself evaluating what his next endeavor would be. Through soul searching and volunteering at a botanical garden for three months, the idea for a nonprofit record label that would support underrepresented musicians in a variety of genres was realized.

I like diversity, discovering the calm, and the commonality, of various forms of music and cultures.

With these values in mind, Pugh assembled a team of like-minded individuals and Little Village began recording in 2014. Often bringing in artists who were first noticed by Jim himself, Little Village’s roster of musicians has steadily grown into a diverse collection of genres and voices from an array of viewpoints.

Aki Kumar left his native home in Mumbai, India for the USA with the intention of working as a software engineer. Then he discovered the sounds of the blues. Kumar worked as code developer for years while honing his music chops on the side and, over time, successfully blended elements of Indian music into his musical and visual presentation of the blues. Kumar has made multiple appearances at The Hardly Strictly Bluegrass festival, has been featured on PRI “The World,” and has toured in Russia, Scandinavia and South America. His ground-breaking Little Village Foundation albums have garnered international critical acclaim. In 2019 Kumar signed with Sony Music India to release a blues-inspired, bi-lingual album “Dilruba”.

Founder and Board Chair of Kid Spark Education, an internationally recognized STEM education nonprofit, Paul Eichen is also the founder of Proxima, a data projection and computer peripherals company. Passionate about education and the environment, Paul lends his financial and corporate expertise as an active member of the Little Village Board of Directors.

Mike Ferguson is the executive director of Sky’s The Limit Fund, a nonprofit focused on transforming the lives of youth in crisis and their families by providing broader access to wilderness therapy programs. His work has taken him all over the world working with folks from all walks of life. Mike resides in Los Angeles with his wife and two daughters.

From the time she was 9 years old Vicki Randle has been in love with singing, guitar, percussion and songwriting. Starting out her career as an opening act for the Brother’s Johnson, Vicki has been on a musical journey for the past 40 years. A multi-talented musician, Vicki has toured with George Benson, Laura Nyro and Kenny Loggins. When not on the road Vicki recorded with artists Aretha Franklin, Herbie Hancock and Todd Rundgren. Vicki is distinguished as having had an 18-year long run as the first and only woman on the Tonight Show with the Jay Leno band. She is currently playing with Skip the Needle, a funk rock and soul band formed with Shelley Dot.

Pamela Rose is a San Francisco based jazz and blues vocalist who has been performing and recording music for the past 40 years.  Her work celebrating women in jazz and blues has been featured on stages across the country.  Rose is on the faculty of the California Jazz Conservatory and has seven recordings under her name. She is also the author of a book about women composers in the early days of jazz.

Singer-songwriter and talented graphic artist Maurice Tani is a contributing musician and Little Village Foundation’s Art Director who has designed the covers of over 30 LVF CD albums to date. Maurice is also an active member of the Artist Committee on Little Village’s Board of Directors. He is one of the principal advocates evangelizing Little Village Foundation’s mission that diverse music builds empathy and, in turn, builds stronger communities and a better world.

Not yet 30 years old Jazmin Morales has made her mark on the music arts world. With a Master’s Degree in Arts Management from Claremont Graduate University, Jazmin grew up around music. Her parents own the Mariachi Studio in Central California where most of the studio’s music students are the children of migrant farmworkers. Jazmin taught violin and helped manage the studio through high school and then went on to college where she interned at the Smithsonian Center for Folk Life and Cultural Heritage and the UCLA Fowler Museum of Cultural History. After college Jazmin worked at the La Jolla Music Society before becoming Manager of The Colburn School Center for Innovation and Community Impact, an academic unit dedicated to providing equitable access for the local community and creating innovative, high-impact programs designed to prepare young artists for sustainable and fulfilling careers. In her “spare” time Jazmin is an adjunct professor teaching master level classes at the University of Southern California’s Thorton School of Music. She also consults in organizational development and strategic programming for NPR and the Smithsonian Latino Center.