Hit songwriter for Huey Lewis finally has an album of his own, after 40 years

West Marin singer-songwriter Mike Duke wrote some of the biggest hits of the 1980s for Huey Lewis and the News. He’s spent most of his career writing songs for other people, playing keyboards and singing on other people’s records. Never his own. Until now. At age 71, he has a debut album being released on the Little Village label. Title: “The Mike Duke Project … took a while.”

In the era of digital recording technology, it seems every middle school band, earnest young singer-songwriter and retired baby boomer has a CD out. So you’d think the guy who wrote “Hope You Love Me Like You Say You Do” and “Doin’ It All for My Baby” for Huey and the News, and who toured and recorded with Americana star Delbert McClinton, would have a whole discography by now. But Duke is all about the slower rhythms of the South, where he’s from. And, in his world, things happen in their own time.

“I didn’t want to be an old fat guy with a bunch of CDs in the trunk of my car,” he says in his musical Alabama accent.

While he never recorded an album of his own, he’s spent loads of time in studios recording demos of his original songs that were pitched to established artists. It’s those never-before-released demos of the Huey Lewis hits and other songs he’s written with stars like Dr. John and Gregg Allman in mind that make up most of the 15 tuneful tracks on “…took a while.”

This project never would have happened without its executive producer, Bob Brown, former manager of Huey and the News and longtime owner of West Marin’s Rancho Nicasio. Twenty years ago, when he bought the old roadhouse, he hired Duke to run its general store and lead its house band, the Rancho All-Stars, featuring Brown’s wife, the Texas blues singer Angela Strehli. Duke’s been part of Rancho’s extended family ever since.

A large, loquacious man with a thick white goatee and straight white hair brushed in bangs down his forehead, he lives on the Rancho grounds and has been referred to from time to time as Nicasio’s unofficial mayor. He likes to chat people up, especially visitors to West Marin, letting them know what’s cool and what isn’t. You can sometimes find him playing an old upright piano and singing in the Rancho bar for anyone lucky enough to be there to hear his impromptu concerts.

Brown knows better than anyone what an overlooked talent Duke is. So when he left his home in Novato to spend the past winter in Mexico, he took along a batch of Duke’s old demo tapes, some of them dating back to the late ’70s, hoping he’d find enough useable material for a Mike Duke solo album.

Those old tapes not only sounded great, they brought back memories of the first time he’d heard them, when Huey and the News were just starting out, looking for hit songs to launch their career. One day in 1981, “Hope You Love Me Like You Say You Do” arrived in Brown’s Mill Valley office on a cassette from a Los Angeles music publisher. Brown knew immediately he’d found what he’d been looking for.

Lewis and band recorded “Hope You Love Me” on their second album and happily watched it soar into the Top 40.

“I was flattered that they would cut it,” Duke says. “And then I was very pleased that they did a good job. They had the Tower of Power horns on it.”

The band next recorded “Doin’ It All for My Baby” as a single on their smash album “Fore!.” It rocketed to No. 6 on Billboard’s Hot 100 pop chart in 1987 and was turned into a popular MTV music video. Huey and band also recorded Duke’s “Let Her Go and Start Over,” a heartbreak ballad that had particular resonance for Brown, who was in the midst of a divorce at the time.

“My marriage was ending, my whole world was falling apart, it was the worst year of my life, and I was hearing this ultimate breakup song that was exactly what I was going through,” he says. “I knew I had to meet this guy.”

They both laugh when Brown tells the story of meeting Duke for the first time. They arranged to get together in Atlanta, where Duke was living then. Brown assumed from his soulful Southern singing voice that Duke was African American, so he was more than taken aback when the songwriter who picked him up at the airport wasn’t black.

“I get off the plane and there’s this big white guy with long hair and a beard, wearing overalls, a white button-down shirt with the tails out and flip flops,” he remembers with a broad grin. He spent the night at Duke’s house and woke the next morning to the smell of breakfast cooking and the sound of Sam Cooke on the stereo. “I thought I’d died and gone to heaven,” he says.

Born in Mobile, Alabama, and raised in a small Alabama town called Thomasville, population 4,209, Duke learned to play by ear on a piano a family friend had given his mother. In 1974, he hooked up with a Mobile-based band called Wet Willie, one of the Capricorn Records bands that launched the Southern rock movement along with the Allman Brothers and the Marshall Tucker Band. For a time in the ’80s, Duke fronted his own group, Mike and the Maximums (“because everyone in it was either fat or tall,” he explains). But they weren’t telegenic enough for the music video market that was such a big part of the pop-rock music zeitgeist in that era.

“I tried to get them a record deal, but they weren’t MTV ready,” Brown recalls. “It wasn’t the right time for someone like him.”

In 1984, Duke moved to Marin, ostensibly to write songs with Lewis and members of the News.

“But the band had just taken off and were never available,” he recalls. “They’d become famous and were gone all the time.”

Duke filled his time playing random gigs, including regular stints at the original Sweetwater in Mill Valley opening for stars like Etta James and Billy Preston. He also toured with Lewis and the News as their opening act.

In the late ’80s, after Brown and Boz Skaggs opened Slim’s, a blues club in San Francisco, he was brought in to play keys and sing in the house band, the Solid Senders. That period ended when McClinton hired him to be in his band, a gig that lasted throughout most of the ’90s. Duke was living in Nashville and working in a warehouse when Brown brought him back to Marin to help out with Rancho Nicasio in 1998. 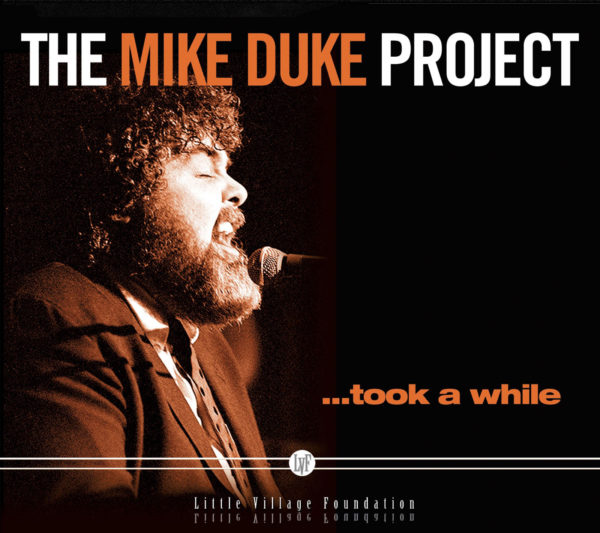 Several new songs were recorded at Rancho Nicasio to round out “…took a while.” The Zydeco Flames back up Duke on the New Orleans-flavored “Let Me Be Your Fool Tonight.” Elvin Bishop plays a scintillating slide guitar solo on a tune called “I Can’t Let You Go.” Members of the Rancho All-Stars are featured on the ballad “I’m Not Sad Tonight,” and Duke does a soul-shaking rendition of his gospel song “Torn & Scarred.” The final cut is a solo piano piece appropriately titled “Nicasio.”

Neither Duke nor Brown has illusions about this album selling millions of copies. Beginning next week, Duke will be be selling copies over the counter in the Rancho General Store. He has no plans to go on the road to promote it. But what’s important is that one of our unsung singer-songwriters finally has an album worthy of his considerable talents.

“Stylistically, Mike does a lot of things, and it’s all on the record — blues, pop, R&B, rock, gospel,” Brown says. “I wanted to include some of the musicians who have been part of Mike’s life in the beginning and part of his life here. And I realized if this album was ever going to be, it was now or never.”

You can buy CDs from Duke personally at the Rancho Nicasio General Store beginning next week. Due Oct. 11, it’s available for download and preorder at iTunes and Amazon. – By Paul Liberatore. Photo by James Cacciatore