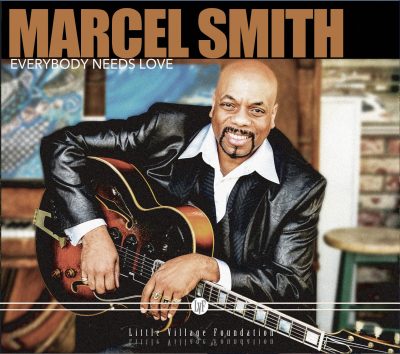 Sacramento singer and multi-instrumentalist Marcel Smith was still in his 20s when he first recorded back in 1993 for the hometown Have Mercy imprint as a member of a group called the Soul Prophets. With Smith’s soul-searing vocals and Robert Nakajima’s fire-spitting guitar, that set, Coming From the Old School, ranks as a serious contender for the Best Album That Nobody Heard award, but apart from recording the 1994 Have Mercy CD Old Time Religion as a member of Sacramento’s W.D. Gospel Singers, Smith has apparently not returned to the recording studio until this effort a quarter-century later.

Now, courtesy of keyboardist Jim Pugh’s Little Village Foundation, we finally have Smith’s first recording under his own name, and it’s a good ’un. Produced by Pugh, Kid Andersen and Rick Estrin, the result is a well crafted album in the manner of the label’s previous efforts with Wee Willie Walker and John Blues Boyd. As Estrin aptly notes, Smith sings like “a fully mature cross between Sam Cooke and Wilson Pickett,” while as a guitarist he sometimes recalls Robert Ward’s

Magnatone tremolo. The 12-track playlist contains no original material, opting instead for an eclectic and unusual choice of covers that mixes gospel with soul and pop. Thus, we get the gospel chestnuts What a Friend We Have in Jesus and This Little Light of Mine along with selections of sacred fare from the Soul Stirrers and the Five Blind Boys of Mississippi, the title track from the Temptations by way of Gladys Knight and three lesser known selections from the Cooke songbook in Keep Movin’ On (with an assist from label mate Walker), Hold Me and That’s Heaven to Me. Bobby Womack’s Harry Hippie and the Hollies’ He Ain’t Heavy, He’s My Brother are the most unorthodox selections, and the program concludes with a beautifully controlled reading of Nat King Cole’s Looking Back, a song also favored by Otis Rush.

It’s been a long wait to hear Marcel Smith get a chance to fulfill the promise of those first recordings for Have Mercy 25 years ago, but we can rejoice that the follow up is here at last and that it shows Smith to be at or near the forefront of contemporary singers.

Hopefully, we won’t have to wait so long to hear him again. —Jim DeKoster