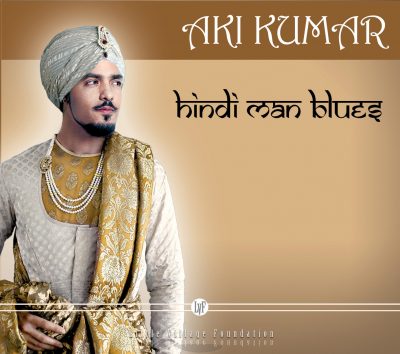 In 2016, Aki Kumar turned heads with Aki Goes to Bollywood, an unprecedented project that fused blues with Bollywood- style Indian pop—two genres not known for breaking with tradition. The unlikely union led Jason Ricci to lovingly pronounce it a “marketing nightmare” in the album’s liner notes, but it went on to establish the Mumbai native as one of the most innovative voices of the next generation of blues harmonica players. With Hindi Man Blues, Kumar doubles down on his idiosyncratic enterprise with a fresh set of material drawn from the same dual wells.

Of course, Kumar is not the first harp player to successfully meld the blues with genres that might at first seem like strange bedfellows. Charlie Musselwhite’s foray into Cuban blues with 1999’s Continental Drifter, Corky Siegel’s classical chamber blues and Wade Schuman’s work with the eclectic troupe Hazmat Modine all come to mind. But Kumar stands out in ways that challenge the standards reviewers typically rely on when assessing a new harp record. Indeed, describing this breathtaking release as “unique” or “innovative,” while accurate, fails to capture the scope of Kumar’s vision.

Several other tracks, such as Ajeeb Daastaan Hai Yeh and Sajan Re Jhoot Mat Bolo, are also inspired by Indian television programs. The instrumental Watermelon Man gets a bluesy, ska-inflected treatment here, and the addition of Andersen’s electric sitar offers a compelling contrast to Herbie Hancock’s original composition. Kumar even takes number 45 to task in All Bark No Bite, an unflinching contemporary protest blues in the Delta style.

Various iterations of the blues idiom are deeply embedded throughout the album, including the more Bollywood-centric tracks. Even those who prefer their blues in three chords and 12 bars will find much to love with Hindi Man Blues. —Roger Gatchet